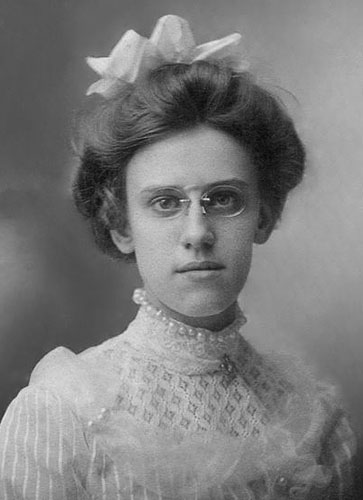 Biography by her son, Albert Cadwallader Worrell: Bertha Cadwallader grew up in a large sixteen-room house at 250 Center Street in Milton, PA. Her father was a successful businessman in groceries and provisions and was active in local politics. The family was not wealthy but lived in comfortable circumstances, which usually included a live-in maid.

Bertha was a sociable and active person and made friends easily. She and Lulu Beck and Sarah Datesman remained close personal friends for over eighty years. She apparently had good relations with her parents. "Papa" comes through in the stories as a rather strict head-of-the-house, but she always spoke of him with affection. And although letters from her mother are signed rather formally "Mother", the bodies of the letters suggest a close relationship between them.

Bertha graduated from Milton High School in 1900. She went away to a girls finishing school for a short time in 1901, but she was unhappy with the strict discipline and isolation and would not stay for even one year. When she came home, she asked her father let her go to college the next year. He told her she could either complete finishing school or stay home (none of the girls were allowed to go to college). So she returned to a life at home with periodic visits to friends and relatives in other places.

By this time most of her brothers and sisters had left home. Iredell married in 1901 and Kate in 1903. Only her younger brother, Albert, remained at home; he was still in school. Her mother's health was deteriorating and it is possible that Bertha took over part of the management of the house.

In March of 1905 her parents moved to the Broadway House Hotel in Milton. Apparently they had sold their house, but we do not know why (probably to generate enough money for him to build the Milton Realty building). Bertha was in Philadelphia, where all of her sisters were living at that time. Albert Cadwallader had planned to take his wife West to visit their son Austin in Los Angeles. On June 13, Bertha's mother wrote saying they planned to leave "on Friday morning" for their son Iredell's house in Kinzua, Pennsylvania. They arrived there but never got farther on their proposed trip. Annie Cadwallader became seriously ill, went down hill rapidly, and died September 15, 1905.

On April 27, 1910, Bertha married Pratt Bishop Worrell of Philadelphia. They were married by George B. Bell, Pastor of the Patterson Memorial Presbyterian Church in Philadelphia, but it apparently was not a formal church wedding. Bertha's brother Albert and his wife-to-be Mae Schreyer stood up with them.

Bertha's sister Gertrude died in Philadelphia in 1909, but her sister Kate and family continued to live in Philadelphia, and her brother Albert lived there for some years after he married Mae Schreyer in 1912. Bertha's father died in Milton on May 2, 1912, but by then she had established her own life in Philadelphia. Bertha and Pratt had one son, who was born on May 14, 1913. They named him Albert Cadwallader after his maternal grandfather.

In the spring of 1914, Bertha and Pratt bought a new house at 5820 Cedarhurst Street in a new housing development in West Philadelphia. It was one of 52 row houses on a one-block street only a block from Baltimore Avenue, a main east and west street. Bertha lived in this house for fifty-four years; she reluctantly sold it in 1968. Bertha and Pratt paid $4,000 for their new home. It was a nice house with three bedrooms, hardwood floors, hot-water heat, a full finished basement, and a handkerchief-sized back yard.

Bertha joined the Ninth Presbyterian Church, which was within walking distance, and was active in various church groups. Pratt was not a religious person, but occasionally went along. Bertha early joined The 1910 Club, an organization of wives of railroad employees, which was formed in that year. The club met periodically at the homes of members for lunch and conversation. When the members were young, they sometimes brought children along. This amazing informal group stuck together for over fifty years, its membership eventually supplemented by daughters. Bertha recorded the deaths of members over the years; she herself may have been the last survivor of the original group. In the 1920's Bertha joined the Order of the Eastern Star and was active in it for a number of years.

Bertha would undoubtedly have led a more active social life if she had been married to a different person. Pratt was a quiet man and definitely not an extrovert. They did play bridge frequently with Dr. and Mrs. Mitterling and a small group of other friends. A rather close relationship existed with the family of Bertha's sister Kate Rife. For a number of years the families regularly got together for Christmas and for Thanksgiving. But Bertha largely had to make her own social life.

Bertha and Pratt apparently enjoyed a happy married life, and the first twenty years were clearly pleasant ones. With the onset of the depression in the 1930's, life became more difficult. Pratt was grimly holding on to his job and after he retired in 1937 he was at loose ends. Things improved when he started to work again in the 1940's, and after he retired from that job life was satisfactory, if unexciting.

Pratt died suddenly on September 12, 1959 after having been in poor health for several years. If he had lived another seven months, they would have been married for fifty years. Bertha was then 77 years old, but active and in good health and continued to live in the Cedarhurst Street house by herself.

By 1968, Bertha was 86 years old and Albert and his wife Helen were becoming more and more concerned about her living alone. The Cedarhurst Street neighborhood had changed, most of Bertha's friends had died or moved, and she was finally willing to consider moving. Helen made a visit to Philadelphia during which the house was sold, much of the furnishings were sold, and Bertha and her most cherished possessions were moved to Cheshire, Connecticut in the fall of 1968. There she settled into an apartment of her own attached to the house of Helen and Albert.

Bertha was ill during the latter part of 1971. Tests showed that tuberculosis, which she apparently had had when young, had become active again. She was able to remain in her apartment and to take meals with the family. But she ate at a separate table and was pretty much isolated because of the danger of infecting the other family members.

At 2:30 in the morning on January 7, 1972, she awakened Albert and Helen with the warning buzzer from her apartment. They found her coughing up blood and called Dr. Zale who called an ambulance, which took her to Yale-New Haven Hospital. On January 10, Dr. Zale had her transferred to Gaylord Hospital in Wallingford. For the next several weeks her condition fluctuated; Helen or Albert would find her feeling good one day and bad the next. On the morning of Tuesday, February 1, 1972, the hospital called to report she had suffered a massive hemmorhage in the lungs and had died. She had received letters from each of her grand-daughters earlier that morning and apparently was pleased.

Bertha May Cadwallader Worrell was buried on Friday, February 4, 1972 in Lot 205 in the Sunnyside Section of Arlington Cemetery in Drexel Hill, Pennsylvania. She was buried beside her husband Pratt, who had purchased that lot for them in 1918. Her funeral was attended by a very small group of relatives and friends; she had outlived many relatives and most of her friends. If she had lived three more months, she would have been ninety years old.